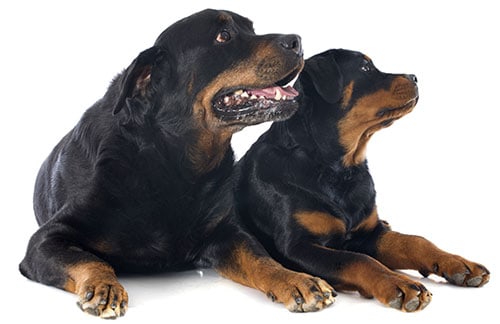 This hardworking dog loves to have a job to perform. His endurance coupled with intelligence and an innate desire to protect makes him an excellent companion, and it’s no surprise that he is used as a police dog, service dog, herder and therapy dog.

The Rottweiler’s powerful appearance can be intimating, but when trained he is a sweet, loving dog who has been known to sit on his owner’s lap like a small dog. For maintenance, his short black and tan coat needs a quick brushing every now and then; for exercise, make sure he gets a good walk or two every day!

The Rottweiler is believed to have originated with Roman dogs. These dogs were used for herding cattle which followed along with traveling Roman armies for food. The dogs both herded and protected the cattle on their journey.

The name Rottweiler originated in southern Germany as these Roman dogs were left behind after Roman armies no longer remained in the Alps and the breed was used by German farmers. The name came from a town in the area called Rottweil.

Eventually the dog was also used for its protective abilities to guard butchers who carried bags of money tied around their necks. Once World War I & II broke out the breed was used for military services and police dogs.

Rottweilers were bred to be a working dog and as such are highly trainable. It’s best to socialize them and train them from a young age so they become used to strangers and other animals. They want to please their owner and spend time with them, but can also be stubborn. It’s also a good idea not to be too rough with them as that can encourage aggressive behavior.

They have a strong drive to protect their territory and their owner, which gives them a bad reputation when they’re owned by irresponsible owners who don’t properly socialize them. Cared for properly however, a Rottweiler is a friendly dog though they make some time to warm up to strangers.

Rotts are a working breed that needs daily exercise. They enjoy walks and swimming. They can also be trained in a variety of canine activities and work activities like herding, tracking and obedience.

Rottweilers have a coat that sheds some throughout the year and quite a bit a couple times a year. Brushing weekly will help maintain their coat. They also need their nails trimmed and teeth brushed.

Rottweilers are a healthy breed in general. They can have hip issues as they age. They also are prone to obesity if over-fed or under-exercised. So it’s best to watch their weight and make sure they stay healthy.