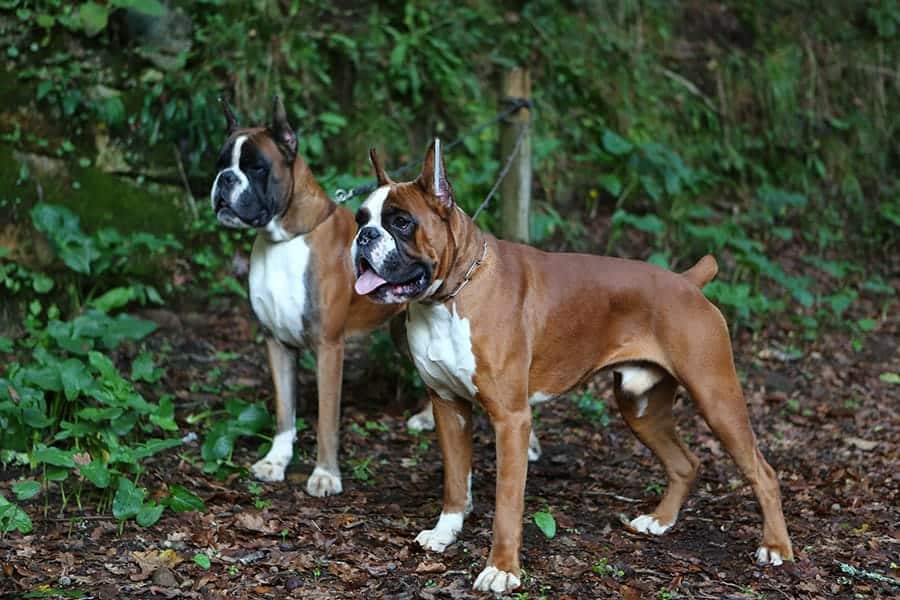 Boxers are fun-loving and loyal pets. They do well with families and are easy to train.

The Boxer is in the top 10 most popular dogs, and it’s easy to see why. They’re loyal, fun-loving, and affectionate friends. Their turned-up nose, pointed ears, and sweet eyes are hard to resist. Characteristically, Boxers are muscular and strong with a smooth and graceful athleticism – like the athlete they’re named for.

The breed descends from a line of dogs found throughout Europe since the 1500s. Today they can have a brindle or fawn coat with white markings. Patient yet playful and easy to train, this dog is a perfect choice for those with families that include children and other pets.

The Boxer originates from the Molosser dog group, developed in Germany in the late 19th century. The breed descended from was called a Bullenbeisser, which was used for hunting bears, deer, and wild boars.

The breed came to the rest of Europe in the 19th century and America in the 20th. It was used as a service dog during World War I & II and then, after the war, became more popular as a companion dog.

Boxers are an intelligent breed which makes them very trainable. However, it also means that you’ll need some variation and excitement in their training to keep them interested. It’s essential to socialize them with other dogs and people at a young age so they become pleasant adults. They tend not to get along with other dogs of the same gender otherwise.

They are friendly dogs when socialized and good with children. In addition, they can be protective of their family members, making them a popular choice.

Boxers are a higher energy breed that needs a good amount of exercise. They are known for chasing animals, so keeping them in a contained area is best if they are off-leash. As a puppy, they will have high energy and tend to jump up, so they’ll need training to change that behavior and will need care around children or more frail adults.

The Boxer doesn’t require much grooming. The occasional brushing will help their coat look its best. They also will need their nails trimmed, and teeth brushed like all dogs.

Boxers don’t do well in extreme heat or cold, so they’re best kept indoors in those conditions. They are generally healthy but should be monitored for hip or other walking issues.

Can Boxers be apartment dogs?

Boxers aren't ideal for apartments, but might be able to live there successfully if there are enough opportunities to find larger spaces nearby to play.

Can Boxers be left alone?

Boxers don't like being left alone for too long. They tend to show some symptoms of seperation anxiety when left apart from their owners for long periods of time.

Are Boxers good with kids?

Boxers do well with kids. As with any dog they should be monitored closely, they're unlikely to become aggressive.

Are Boxers friendly with strangers?

Typically, Boxers are friendly with strangers. They tend to be open and willing to trust those they don't know.

Do Boxers get along with other dogs?

Although Boxers will mostly get along with other dogs, they may have some issues. They can typically be dealt with by socializing them with other dogs.

Do Boxers bark a lot?

A Boxer will most often bark only when alerting about something. They likely need something or see a stranger if they're barking.

Do Boxers shed a lot?

The Boxer isn't a heavy shedder. Some limited brushing and occassional cleaning should help prevent much hair build-up.

Do Boxers need a lot of grooming?

Do Boxers need a lot of exercise?

Expect Boxers to have high energy levels and need a lot of exercise. You'll need to find options to release this energy or they may exibit bad behavior.

Are Boxers easy to train?

Typically, Boxers are easy to train. They enjoy the bonding process with their owner and are quick to learn.

Boxers don't like the cold and will likely want some protection if outside for long.

It's best not to have a Boxer in hot temperatures for long as it can be dangerous to their health.