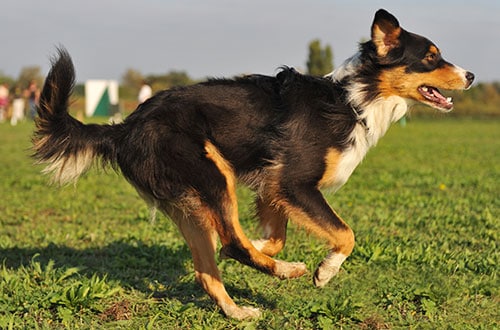 The Australian Shepherd is all about working hard. After all, it was bred to do a very important job: herd livestock on ranches and farms. Intelligent and diligent, Aussies do well in agility and obedience events. If you’re going to bring one home, just make sure you are in a position to give him the exercise he needs.

In addition to their work ethic, Australian Shepherds are also known for their thick coats which can be black, blue merle, red or red merle and may have tan or white markings. This breed is easy to train and good with kids and other pets.

It’s unclear how the Australian Shepherd got its name. The breed was officially developed on the West Coast of the United States. It’s possible that it was brought from immigrants that migrated through Australia, named for the sheep imported from Australia that it herded, or had a similar coat color to dogs from Australia.

The breed was used a sheep herder in the Rocky Mountains because it worked well at high altitudes. It’s possible that these dogs descended from Spanish breeds as many of these settlers inhabited the West Coast.

It’s very important to expose the Australian Shepherd to early socialization and obedience training. They need to have a good outlet for their energy, companionship and boundaries. They can become overly aggressive about their property if not properly trained and socialized.

They have a strong loyalty to their owner and intelligence that makes them easy to train. They do great on ranches or other similar properties.

Australian Shepherds require a lot of exercise on a daily basis. They need a fenced in area to run around in for at least an hour or two. They do good running, walking or hiking. If not exercised properly they can become destructive.

They do a great job with work as well. This can include herding, obedience, agility or diving.

Australian Shepherds require some brushing to keep their coat in good shape and help remove shedding hair. They need occasional baths when dirty and their nails trimmed regularly. Their teeth should be brushed and ears checked for buildup and cleaned.

Australian Shepherds are generally a healthy breed. Things to watch out for are vision problems and Epilepsy (they are the most common breed to have Epilepsy).