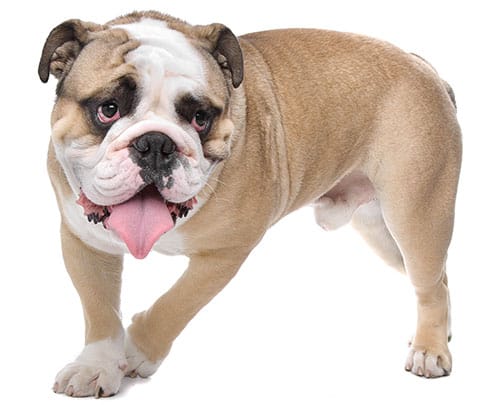 Quickly rising in the ranks of the most selected dogs, the Bulldog is becoming quite the popular choice for new dog owners. With a large, pushed-in face, turned-up nose and loose skin, the Bulldog’s face is easily recognizable. Their body is strong and muscular with a stocky shape.

It is believed that the Bulldog originated in the British Isles. “Bull” was added for the breed’s use in bull baiting, a cruel practice that has thankfully been discontinued.

People today are choosing the Bulldog for his cute, wrinkly face and easy-going, friendly nature. It also helps that they don’t require much exercise.

The Bulldog has been known in England since at least around the early 1600s. The breed’s name comes from the practice of bull-baiting, which was a gambling & sporting event where bets were placed on dogs attempting to grab a bull by its nose to pin it down. This practice was eventually seen as an act of animal cruelty and outlawed.

After the Bulldog was no longer used in this sport its breeding changed to become more of a pet. Loosing some of its original aggressiveness and its physical abilities.

Bulldogs are friendly and happy to please their owner. They do best with early training and socialization. It’s a good idea to train them to allow their food to be taken away when young so they don’t become overly aggressive about it. They love chewing on things & playing tug of war but it’s helpful to train them with a command to release the toy such as “give”.

Bulldogs are a fairly low energy breed. It’s a good idea to take the on short walks to help maintain their healthy weight. When it’s very hot out it’s best to keep them indoors or prevent over exerting as they can have breathing issues. Be careful around water as their short legs only do well in shallow areas.

Bulldogs should be brushed occasionally to maintain their coat and control shedding. They can have issues if their face wrinkles aren’t checked & cleaned. As with all dogs it’s best to check & clean their ears when needed and cut their nails.

Bulldogs do not do well in heat or with extreme exertion because of their short face. It’s important to make they have enough water and aren’t left in the heat or a car during warm months. When overheated their panting tongue can hang lower and look more blue than usual. If this happens cool water and ice can help.