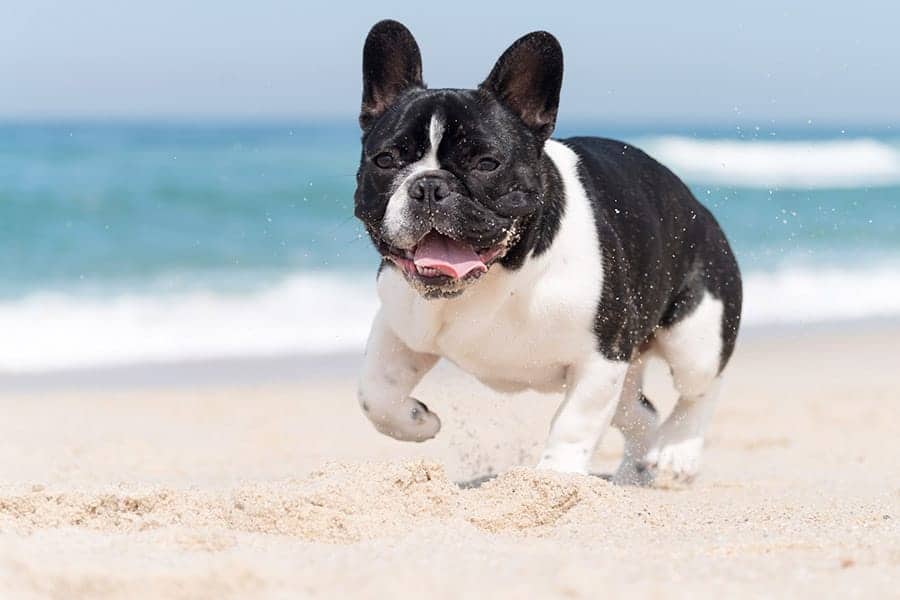 The French Bulldog is affectionate with family and good with kids. They're a lower-energy breed who doesn't need much exercise.

The French Bulldog is quickly rising in the ranks of most popular dogs. Their adorable squeezed and wrinkly face is winning over legions of fans who also appreciate their affectionate and playful nature, especially with kids and other pets. They are also great for busy pet owners since they don’t require much exercise or grooming.

While the exact origin of the French Bulldog is unknown, experts think it must have descended from the English Bulldog and was likely the toy variety of this breed. It should be noted that they can be stubborn sometimes, so have patience during the training period. It will eventually pay off!

The origins of the French Bulldog begin with ancient Greeks, who bred a Mastiff-type dog that was used to fight bulls. Eventually, this practice became outlawed, and these “Bulldogs” were bred for more non-sporting reasons.

This led to smaller versions of the breed by crossing them with terriers in England. This breeding eventually lost popularity in England but increased in France, where the French Bulldog earned its name. These dogs were very popular with various artistic communities in France. Eventually, the breed became popular outside France and imported into the US, where a breeding program was established in 1885.

Frenchies are relatively easy to train as they are people pleasers but be aware that they have a stubborn streak. Early and consistent training can help overcome this, and treats make great motivators. In addition, it’s a good idea to socialize your dog early with strangers and other dogs.

The dog enjoys companionship with humans and shouldn’t be left alone for long periods as they can have separation anxiety.

French Bulldogs don’t need too much exercise. A short daily walk or some outdoor playtime should keep them in shape. They have a short, flat face which can cause breathing issues when overexerted. It’s best to avoid over-exercising in hot/humid weather.

Frenchies shed a minimal amount, including a couple of times a year when they lose their undercoat. If brushed weekly, it’ll help control the amount of hair. The folds in their face need to be kept clean & dry. Their nails should be trimmed regularly.

French Bulldogs can have breathing issues because of their short snout. Therefore, it’s best to avoid hot weather. They also aren’t swimmers; care should be taken around water, including avoiding leaving them unattended during a bath.

Can French Bulldogs be apartment dogs?

The French Bulldog is an excellent apartment dog. They don't need as much space for activity and will be happy in a condo or apartment.

Can French Bulldogs be left alone?

French Bulldogs are extremely social and need lots of interaction with their owners. They don't like being left alone and will likely become destructive or anxious if left for long periods.

Are French Bulldogs good with kids?

French Bulldogs do well with kids. As with any dog they should be monitored closely, they're unlikely to become aggressive.

Are French Bulldogs friendly with strangers?

Typically, French Bulldogs are friendly with strangers. They tend to be open and willing to trust those they don't know.

Do French Bulldogs get along with other dogs?

Although French Bulldogs will mostly get along with other dogs, they may have some issues. They can typically be dealt with by socializing them with other dogs.

Do French Bulldogs bark a lot?

French Bulldogs don't bark very often of may never bark. Most barking is trained or in extreme situations.

Do French Bulldogs shed a lot?

French Bulldogs shed quite a bit. You'll need to brush them often to limit the hair on your floors and clothing.

Do French Bulldogs need a lot of grooming?

With a French Bulldog you won't need to dedicate any extra time to special grooming. Their coats are easy to deal with.

Do French Bulldogs need a lot of exercise?

French Bulldogs don't need a ton of exercise. You'll just need to provide some basic activity to keep them healthy.

Are French Bulldogs easy to train?

Although French Bulldogs can be a challenge to train, they can be taught with some dedicated work or by hiring some training help.

French Bulldogs don't like the cold and will likely want some protection if outside for long.

It's best not to have a French Bulldog in hot temperatures for long as it can be dangerous to their health.