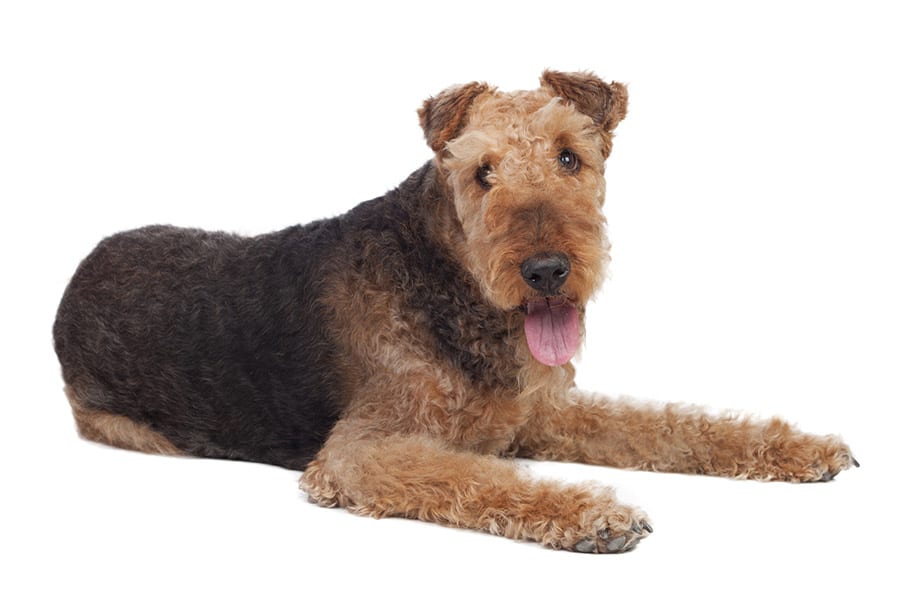 Clever, confident, and alert, the Airedale has a sweet disposition but isn’t afraid to stick up for himself.

Airedales are the largest of all terriers, with males standing at about 23 inches in the shoulder and females only a bit smaller. The breed is thought to have originated in the Aire River valley in England in the mid-1800s and was used for hunting large rats found in the area.

Airedales’ wiry, tan coat does require regular brushing and stripping. The breed also needs regular exercise and stimulation, as it can get bored quickly. However, you can count on Airedales to be great with children and other pets and very easy to train.

The Airedale Terrier is a cross, primarily of the old English rough-coated Black and Tan Terrier and the Otterhound. The breed originates from Airedale, a valley in Yorkshire named for the River Aire.

These dogs were used by hunters who would pair them up with hounds to chase prey, and then the Airedale would complete the kill. This showed the Airdale’s courage to track down prey even into its burrow. In addition, these dogs made great guardians of farms and homes.

The Airedale was used to transport mail and messages to soldiers during World War I. The Red Cross also used them to uncover wounded soldiers. Police initially used Airdales before switching to German Shepherds. U.S. Presidents Theodore Roosevelt, Calvin Coolidge, and Warren Harding owned the breed.

Airedales are intelligent dogs who are happy to comply with their owners and easy to train. Being clever, however, means that they are prone to boredom and stubbornness if you don’t mix up the training regimen. It’s a good idea to provide activities and mentally stimulating toys to keep them occupied in combination with obedience training.

Airedales, like other Terriers, have a high level of energy. This breed will need activity several times per day. This can include walks and play sessions in a yard or dog park.

Airedales don’t shed too much, but it’s a good idea to brush them weekly to take care of loose hairs and maintain their coat. The coat overall needs little maintenance. The occasional bath can be given to keep it clean as well as a few times a year, the dog can be professionally groomed/clipped.

Airedales are a healthy breed; hip dysplasia is one item to keep an eye out for. As with other dogs, ears should be checked and cleaned, and teeth should be brushed.

Can Airedale Terriers be apartment dogs?

Airedale Terriers don't do very well in apartments. It's recommended to look at another breed better suited to apartment-living.

Can Airedale Terriers be left alone?

While Airedale Terriers prefer to be around their owners, they can do fairly well when left alone if necessary.

Are Airedale Terriers good with kids?

Airedale Terriers can do fine with kids. They will require some monitoring and training to make sure they get along and react well to unpredictable behavior.

Are Airedale Terriers friendly with strangers?

Although Airedale Terriers can take a bit to warm up to a stranger, they are mostly friendly with others.

Do Airedale Terriers get along with other dogs?

Airedale Terriers aren't usually friendly with other dogs. They tend to not get along unless carefully socialized.

Do Airedale Terriers bark a lot?

As far as dogs go, Airedale Terriers bark an average amount. You can expect them to bark to alert you, get your attention, or when there are strangers or other dogs.

Do Airedale Terriers shed a lot?

The Airedale Terrier isn't a heavy shedder. Some limited brushing and occassional cleaning should help prevent much hair build-up.

Do Airedale Terriers need a lot of grooming?

Although Airedale Terriers require a medium amount of maintenance to keep their coats healthy. Simple tasks like brushing and bathing will suit this breed.

Do Airedale Terriers need a lot of exercise?

A Airedale Terrier will need a moderate amount of exercise to be happy. You'll need to plan some basic walks or fetch during the day.

Are Airedale Terriers easy to train?

Typically, Airedale Terriers are easy to train. They enjoy the bonding process with their owner and are quick to learn.

Airedale Terriers do well in hot climates and can stay out longer without overheating.