After five years with our dog Toby, a tall and muscular Labrador Retriever who weighs in at over 100 lbs, I’ve become resigned to the fact that there just aren’t that many toys out there for him.

You see, Toby doesn’t simply play with a toy. He sets out to destroy it completely in as little time as possible.

Stuffed animal? He’ll immediately bite off the head and pull out the squeaker.

Tennis ball? He’ll bite it in half in 10 seconds flat.

Rope toy? He’ll pull out the threads until it’s basically a pile of string.

We’ve had many friends, and family members buy Toby a toy, only to see him savagely rip it apart like a Tyrannosaurus Rex. At this point, Toby rarely, if ever, gets new toys due to his destructive instincts.

When we saw that BarkBox offered a Super Chewer box created specifically for tough chewers like Toby, we were curious. Would the toys and treats hold up? We had to find out.

Super Chewer arrived in a well-designed box with the slogan “Let’s chew it.” I liked the attitude but was still skeptical if the items in this box could hold up to the beast of an animal that is my dog.

The box included two toys that were both made of very strong, durable rubber, and after feeling the materials, I knew they might stand a chance against Toby.

Also included were four different treats: two bags of small dog treats, one made of turkey and the other of duck; a roasted beef steak treat; and a salmon stick.

The first toy was an adorably shaped acorn attached to a durable rope. Right away, Toby wanted to play tug-of-war, and we had a blast wrestling together.

As soon as Toby got the toy acorn away from me, however, he was off to the races and ready to destroy it. I watched him forcefully chew, bite and gnaw at it with all his might.

Ultimately, the only damage was a few puncture marks. 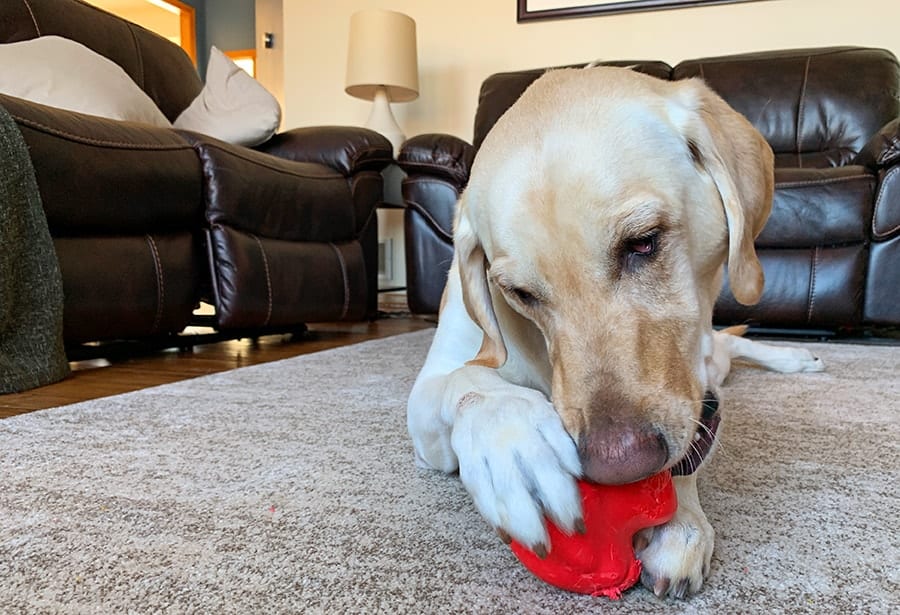 The second toy in the box was shaped like a cardinal and had a squeaker inside that would make noise if pressed hard enough.

Toby was super pumped about having not one but two new toys, and he immediately snatched it away from me – with the intent to decimate it, of course.

He was even more aggressive with this toy and started to chew it hard. He did a little more damage to this one, taking out a couple of very small chunks, but it was still fully formed at the end of the day. Most other toys would be a pile of scraps, so I call it a success.

For treats, we’re a little less critical. Toby is obsessed with food. In fact, he sits by his food bowl a half hour before mealtime and starts drooling.

So imagine Toby’s delight when he saw all these new treats sitting on the counter. We of course, didn’t give it to him all at once – although I don’t doubt that he would have eaten every single morsel if we did.

We started by giving him one each of the turkey and duck treats. They were small and would be great for training exercises, stuffing in a Kong, or when you wanted to give your dog a small reward.

Here Toby does a trick to earn his treat:

We’re saving the salmon stick and roasted beef steak for another day. It’s great to have options like this on hand as a special reward or to keep him busy when he’s getting antsy.

At the end of the day, both toys were very much intact after hours of play, which is downright miraculous. They look a bit worn, but the fact that Toby didn’t shred them into pieces says volumes about the quality.

He now has two new toys to play with when he needs to expel some energy – and believe us, that is quite often.

As for the treats, they were all made of healthy ingredients, and Toby gobbled them up without complaint. It was nice to have more options other than the usual Milk-Bone biscuits and peanut butter that we give Toby.

If you have a heavy chewer, we would definitely recommend Super Chewer. The toys are made well and stand up to tough chompers like Toby.

Receiving a box in the mail is also a fun surprise. We had a blast going through it and seeing what was inside, and with how cold the weather has been here in Minnesota, it was nice that Toby had new toys and treats to keep him occupied.

Get 50% OFF Your First Super Chewer Box. Offer Ends Soon!

Jessi is a marketing strategist for Fortune 50 companies who loves to research and write about all things dog. She is the proud mom to Toby, a giant Labrador Retriever who thinks he’s a lapdog. He inspires her to be a better pet parent and to share advice with other dog owners.
Check out more articles about: Dog Products