The Pomeranian Chihuahua mix combines two small and spirited breeds to create a designer dog affectionately called the Pomchi. This mix is increasing in popularity, and we have everything you need to know about this darling little dog.

With cross breeds, do keep in mind that there is much more variance in physical appearance and personality traits than with purebred dogs. Fully understanding the background of both these breeds, however, will provide you with a solid guide to the Pomeranian Chihuahua mix. 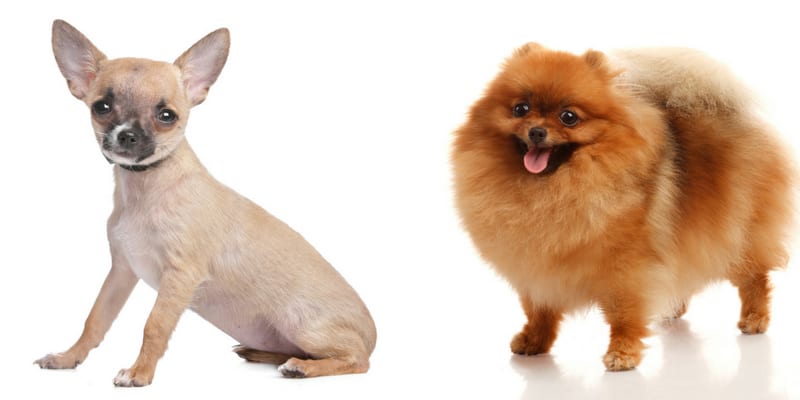 A Chihuahua (left) and Pomeranian (right)

The Pomeranian breed hails from Pomerania, a region in northwest Poland and northeast Germany. It originally descended from larger Spitz-type dogs hundreds of years ago.

Today, this toy-size pup is beloved by pet enthusiasts all over the world and ranks 22nd on the American Kennel Club (AKC) list of most popular dog breeds.

The Chihuahua got its start on the other side of the world with origins in Chihuahua, Mexico. Two varieties of Chihuahua are recognized by the AKC today – the Smooth Coat (shorthaired) and the Long Coat (longhaired). The difference will impact the appearance of a Pomeranian Chihuahua mix. More on that below.

Widely regarded as the smallest dog breed, the Chihuahua is the 32nd most popular dog breed according to the AKC.

The Pomeranian weighs a mere 4-8 pounds and stands only 6-7 inches. The breed may seem a smidge larger, however, thanks to its abundant double coat which provides a plume of fluff around the Pomeranian’s entire body.

The Pomeranian is quite the cutie with its soulful eyes, adorable button nose and smiling mouth.

It’s hard to believe, but on average the Chihuahua is even smaller. The breed stands 5-7 inches tall and weighs no more than 6 pounds.

As mentioned above, the Chihuahua comes in two varieties: the more popular Smooth Coat (shorthaired) and the Long Coat (longhaired). Despite the differences in coats, both have the breed’s trademark pointy ears and saucer eyes.

With the Pomeranian Chihuahua mix, your pup will likely be between 4-7 pounds. As with all mixed breeds, the appearance can vary widely and there is no way to predict the exact proportions of this mixed pup.

Generally, most Pomeranian Chihuahua mixes will retain a fluffy coat from the Pomeranian side, especially if mixed with a Long Coat Chihuahua. Given the appearance of both breeds, the mix will have upturned ears and a tiny button nose that give it a fox-like appearance.

The Chihuahua is known for its large, prominent eyes, so it’s likely a Pomeranian Chihuahua mix will feature larger-than-average eyes in proportion to its body.

As mentioned before, there are no guarantees with mixed breeds. Your Pomchi could end up looking more like a Chihuahua or more like a Pomeranian. 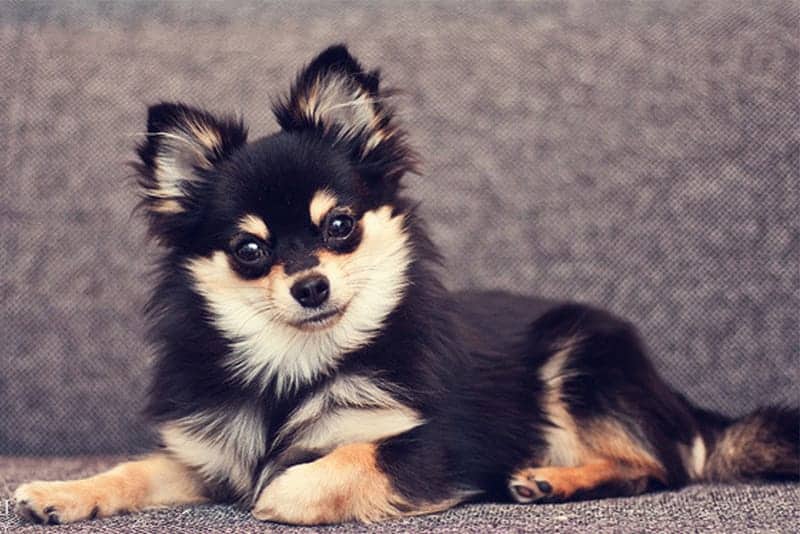 Both the Pomeranian and Chihuahua are lively and alert dogs, so there is little doubt that those characteristics will be passed on to a Pomeranian Chihuahua mix.

The Pomeranian is an extroverted dog who likes meeting new people and is full of life. Smart and inquisitive, this breed is quite curious about the world and often on high alert.

Despite weighing only 4-8 pounds, the Pomeranian thinks he’s bigger than he really is and will bark at anything out of the ordinary. Proper training, however, will help reign in this bossy behavior.

As for the Chihuahua, the breed is bold and confident with a personality that is similar to the Terrier. Like the Pomeranian, the Chihuahua is watchful and will keep an eye out for you, which can be both good and bad. They can also become timid and scared if not properly socialized, which makes training very important.

As for the Chihuahua, the cute little canine is a healthy breed overall. The breed is known to have higher rates of heart problems, eye disease and patellar luxation, so it’s important to watch for these.

Like its parent breeds, the Pomeranian Chihuahua mix will likely be a small but sturdy dog. Just make sure to recognize its small size and protect it from potential threats, like larger, more aggressive dogs or grabby toddlers.

One of the Pomeranian’s most distinguishing features is its bountiful double coat. Frequent brushings are needed to keep its luscious locks looking good.

For the Chihuahua, the smooth-coat variety needs only an occasional brushing whereas the longhaired needs more frequent brushings.

As for the Pomeranian Chihuahua mix, you’ll likely need to brush it a few times each week, depending on the texture and length of your Pomchi’s fur. 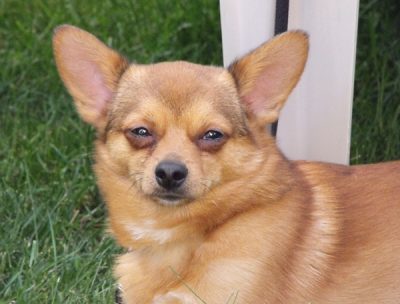 Training is needed early on for both the Pomeranian and Chihuahua to keep their barking in check and to establish that you are in charge.

House training can also be a challenge for these breeds, so you’ll want to be diligent with a Pomeranian Chihuahua mix.

Ultimately, solid training upfront will result in a better behaved dog, which equals less work in the long run.

As for exercise, the Pomeranian Chihuahua mix is a spirited and playful pup who loves to run around and have some fun. They also enjoy short walks, although make sure you don’t overexert this tiny tot.

Pomeranian Chihuahua Mix: Is It Right For You?

They say good things come in small packages, and when it comes to the Pomeranian Chihuahua mix, we couldn’t agree more!

Jessi is a marketing strategist for Fortune 50 companies who loves to research and write about all things dog. She is the proud mom to Toby, a giant Labrador Retriever who thinks he’s a lapdog. He inspires her to be a better pet parent and to share advice with other dog owners.
Check out more articles about: Dog Breeds