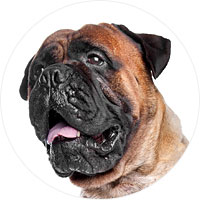 A gentle giant, the Bullmastiff can get up to 130 pounds – the same size as many humans! Agile and active, this breed acts as a natural guardian to its family. This can be traced back to his past in England where he guarded estates from poachers.

Surprisingly, the Bullmastiff doesn’t require a huge amount of exercise and needs very little grooming. If you have the room, this breed makes an excellent companion – he’s loyal and affectionate and charming.

The Bullmastiff was bred from the aggressive Bulldog and the large but less aggressive Mastiff to produce a guardian dog to ward off poachers in the 1800s. Bullmastiffs were charged with guarding British gamekeepers lands.

The breed was also imported to South Africa to guard De Beers’ diamond minds in the early 1900s.

Bullmastiffs are not only strong but also strong willed. Early socialization and training is important. With the right exposure these dog can be trained for activities including obedience, agility, and tracking.

Bullmastiffs have varying levels of energy. They generally need to be walked daily, but don’t need to be run. They enjoy being outside but should be fenced as they’re protective of their territory.

Occasional brushing helps with seasonal shedding. They need bathing when dirty and a healthy diet to maintain their coat.

As with many larger breeds Bullmastiffs can have hip and joint issues. They can also develop bloat, which can related to eating a large meal or too much water. They should avoid vigorous exercise right afterward.

Can Bullmastiffs be apartment dogs?

The Bullmastiff is an excellent apartment dog. They don't need as much space for activity and will be happy in a condo or apartment.

Can Bullmastiffs be left alone?

Bullmastiffs are a very independent breed. They will typically do well when on their own for longer periods. Just be sure to avoid being neglectful.

Are Bullmastiffs good with kids?

Bullmastiffs can do fine with kids. They will require some monitoring and training to make sure they get along and react well to unpredictable behavior.

Are Bullmastiffs friendly with strangers?

Bullmastiffs tend to be uncomfortable with strangers. They will require extra training effort to socialize them with those outside their family.

Do Bullmastiffs get along with other dogs?

Bullmastiffs aren't usually friendly with other dogs. They tend to not get along unless carefully socialized.

Do Bullmastiffs bark a lot?

Bullmastiffs don't bark very often of may never bark. Most barking is trained or in extreme situations.

Do Bullmastiffs shed a lot?

Bullmastiffs shed a medium amount. They will have seasonal shedding, but aren't terrible to clean up after.

Do Bullmastiffs need a lot of grooming?

With a Bullmastiff you won't need to dedicate any extra time to special grooming. Their coats are easy to deal with.

Do Bullmastiffs need a lot of exercise?

The Bullmastiff has a good amount of energy and will need to be exercised with some walks and play to keep them happy.

Are Bullmastiffs easy to train?

Although Bullmastiffs can be a challenge to train, they can be taught with some dedicated work or by hiring some training help.

Be careful with Bullmastiffs in the heat. They don't do well in hot climates for long periods.