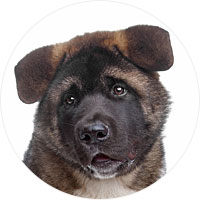 Originating in Japan several thousands of years ago, this ancient dog breed is dignified and loyal. Akitas are strong, powerful dogs known for their erect ears, curled up tails and bushy coat, which can be white, pinto or brindle in color.

Akitas are easy to train and require a medium level of exercise and activity. In some ways, they are like a cat – they like to groom themselves and are independent yet loyal. The breed is great with kids and pretty good with other dogs; some have been known to be aggressive with other canines, especially those of the same sex.

Can Akitas be apartment dogs?

Akitas aren't ideal for apartments, but might be able to live there successfully if there are enough opportunities to find larger spaces nearby to play.

Can Akitas be left alone?

Akitas do well when left alone for longer periods of time. They don't tend to have seperation anxiety issues. Just be sure to avoid being neglectful.

Are Akitas good with kids?

Akitas aren't a good breed for people with kids. They may be able to live with children given some training, but they don't do well with rowdy behavior.

Are Akitas friendly with strangers?

Akitas tend to be very slow to warm up to strangers. They require long periods of exposure before they will trust somone.

Do Akitas get along with other dogs?

Expect Akitas to not get along well with other dogs. Socializing this breed to other dogs may be a difficult process.

Do Akitas bark a lot?

A Akita will most often bark only when alerting about something. They likely need something or see a stranger if they're barking.

Do Akitas shed a lot?

Akitas shed a medium amount. They will have seasonal shedding, but aren't terrible to clean up after.

Do Akitas need a lot of grooming?

The Akita requires continued maintenance to keep their coats in healthy condition. They're not the most demanding but are on the higher end.

Do Akitas need a lot of exercise?

The Akita has a good amount of energy and will need to be exercised with some walks and play to keep them happy.

Are Akitas easy to train?

Typically, Akitas are easy to train. They enjoy the bonding process with their owner and are quick to learn.

If you live in a cold climate, Akitas will do extremely well and may even enjoy being outside in the chilly weather.

Be careful with Akitas in the heat. They don't do well in hot climates for long periods.